Make the Java file generation process multi-threaded. It was logging a wrong name. Correct a regression in the fix for that didn’t correctly handle a final empty message part in all circumstances when using PerMessageDeflate. Deleting a JAR while the application is running is not supported and errors are expected. Correct display of outdated sessions in sessions count listing in Manager application. Patch provided by Huxing Zhang. 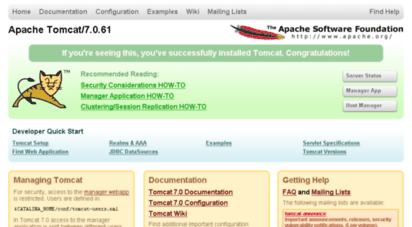 Ensure implementation of Session. This enables TLS connections to close cleanly. Correct a thread safety issue that meant that blocking message writes could block indefinitely if the WebSocket connection was closed while a message write was in progress.

Ensure that if a client aborts their connection to the stock ticker example the only way a client can disconnectthe example continues to work for existing and new clients. Ensure that clear the channel instance from channel services when stopping channel. Add a note to the Context documentation to explain that, by default, settings for a Context element defined in server. Refactor Hostname validation to improve performance. Correct regression in 7. Patch provided by usc. Refactor the fix for so it only applies when using PKCS12 keystores as regressions have been reported with some other keystore types. Fix some potential resource leaks when reading properties, files and other resources.

The 7.0.611 value is different for the different implementations. When failed to replication, rather than all member is handled as a failed member, exclude the failure members from backup members.

Fix default value of validationInterval attribute in jdbc-pool. With some frameworks this can trigger an unexpected initialisation thread and if initilisation is not thread-safe the initialisation can then fail. Ensure that using tomccat CrawlerSessionManagerValve in a distributed environment does not trigger an error fomcat the Valve registers itself in the session.

Avoid logging version information in the 7.00.61 since it then gets logged at undesirable times such as when using StoreConfig. Make skipping non-class files during annotation scanning faster by checking the file name first. Change the default shutdown port used by the Windows installer from to -1 disabled. Correctly handle multiple accept-language headers rather than just using the first header to determine the user’s preferred Locale.

Patch provided by Kirill Romanov via Github. Reset the instanceInitialized field in StandardWrapper when unloading a Servlet so that a new instance may be correctly initialized.

Work around the behaviour of the Oracle JRE when creating new threads in an applet environment that breaks the WebSocket client implementation. Add log message that PING message has received beyond the timeout period.

Fix potential NPE that depends on the setting order of attributes of static member when using the static cluster. Add path parameter handling to HttpServletRequest.

Identified by Coverity Scan. Fix the corruption of web. Pre-load an additional class, the loading of which may otherwise be triggered by a web application which in turn would trigger an tomcay when running under a security manager. Provide a mechanism that enables the container to check if a component typically a web application has been tmcat a given permission when running under a SecurityManager without the current execution stack having to have passed through the component. Note that sending a message via an Encoder may result in the message being send via getSendStream or getSendWriter.

Update all unit tests that test the HTTP status line to check for the required space after the status code.